My blog has inspiread a drinking game.

My post Planning on posting to an Internet discussion board? was posed to this blog post with the following comments:

Was sent this and instantly thought of [other commenter].

Classic. I love it. Maybe we should have a drinking game: every time [other commenter] hits 50 in a thread, everyone drinks.

Posted by The Heterodox Homosexual at 10:38 AM No comments:

In this series of blog posts, your mission, should you choose to accept it, is to read each quote and guess, before doing a Web search, whether someone in the religious right or the politically correct left said it.

Saying once [gay men] started getting heavily into fashion the model shape changed towards a male form (essentially what a [gay man] would enjoy looking at). Like what Em said.

Now I wouldn’t give a shit except for the fact that they hold up these women ... as an ideal form, knowing damn well 96% of the female population isn’t going to look like that. So women get breast implants, liposuction, nose jobs, spray tans (or skin lightener), lip filler and spend millions on diet and exercise crazes. In the end, women hate themselves and each other.

Posted by The Heterodox Homosexual at 12:37 PM No comments:

I'd prefer to believe that this was an isolated incident. Nonetheless, when I first encountered self-declared progressives, one of the first things that I noticed about them was their combination of feigned regard for the downtrodden working class and undisguised contempt for actual working-class people. In the same breath, they could talk about their enlightened, egalitarian ideals and grouse about those stupid redneck hicks. I even pointed out as much in a letter to the editor and thus lost a "friend," who could muster no response except the standard-issue appeal to ridicule. Never underestimate people's willful ignorance of their own hypocrisy.
Posted by The Heterodox Homosexual at 10:45 AM No comments:

As I have noted before, since the November election, users of the argumentum ad populum against marriage equality have quietly memory-holed that argument. Nonetheless, I did not anticipate the sheer brazenness of Cardinal George, Catholic Archbishop of Chicago, who said in a pastoral letter (emphasis added),


If we ignore in law the natural complementary of man and woman in creation, then the natural family is undermined. Our individual lives become artificial constructs protected by civil “rights” that destroy natural rights. Human dignity and human rights are then reduced to the whims of political majorities.

Yes, because we all know that reducing human rights to the whims of political majorities would be very bad.  We must follow the eternal verities, whatever they are this week.
Posted by The Heterodox Homosexual at 5:23 AM No comments:

A picture tells a thousand words (just not the ones you intended).

I've seen this floating around the intertubes: 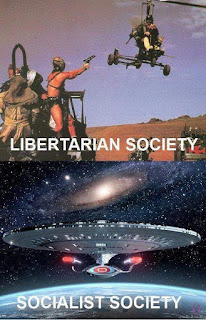 The problem is that justifying your political and economic views by appealing to a science-fiction show set in a post-scarcity society isn't exactly the most credible argument.
Posted by The Heterodox Homosexual at 4:17 PM No comments: