How consistent is your view of religion?

In case you want to find out, here is a 17-question quiz:

In this activity you’ll be asked a series of 17 questions about God and religion. In each case, apart from Question 1, you need to answer True or False. The aim of the activity is not to judge whether these answers are correct or not. Our battleground is that of rational consistency. This means to get across without taking any hits, you’ll need to answer in a way which is rationally consistent. What this means is you need to avoid choosing answers which contradict each other. If you answer in a way which is rationally consistent but which has strange or unpalatable implications, you’ll be forced to bite a bullet.

I managed to get through without taking any hits or biting any bullets.
Posted by The Heterodox Homosexual at 2:07 PM 1 comment:

If a church denies us communion ...

... we should deny it the sanction of the victim. By now, you've likely heard of this:

Deep in grief, Barbara Johnson stood first in the line for Communion at her mother’s funeral Saturday morning. But the priest in front of her immediately made it clear that she would not receive the sacramental bread and wine.

Johnson, an art-studio owner from the District, had come to St. John Neumann Catholic Church in Gaithersburg with her lesbian partner. The Rev. Marcel Guarnizo had learned of their relationship just before the service.

“He put his hand over the body of Christ and looked at me and said, ‘I can’t give you Communion because you live with a woman, and in the eyes of the church, that is a sin,’ ” she recalled Tuesday.

I won't get into whether Ms. Johnson, Fr. Guarnizo, or both acted inappropriately under Catholic canon law or whether the Archdiocese of Washington did the right thing by apologizing to her. I will say, however, that by caring whether a church will let us partake of its sacraments or ordinances, we give it a power over our lives that it neither necessarily has nor deserves to have. Instead, it makes more sense for all concerned if we shake off the very dust from our feet. While I don't lightly agree with a source like this, he has a point when he writes the following:

4. * * * If you don't like the Catholic church, don't become Catholic and don't come to our Mass and other events. Isn't that what you tell those who oppose abortion (Don't get one.)?

5. Please remember, no one forces you to be a Catholic or take Communion in our Churches. If you do, then you should respect our requirements. I have been to churches and synagoges for funerals, weddings and other occassions. I will stand, sit and even kneel when it is appropriate. I will not say their prayers or receive their "communion." I will not make a scene when they say or do something that I do not agree with. It is their faith, and that is fine with me. I am there as a guest.

An argument I think advocates of marriage equality should stress

I've commented here and here on arguments that I wish advocates of marriage equality would stop using, but there's one that I don't think they use often enough. Since opponents of marriage equality tend to use religion as a reason, or at least a pretext, we need to emphasize that at least here in America, as opposed to Iran, our Constitutional rights include freedom from establishment of religion, so that we should decide the scope of secular marriage under secular principles rather than any particular church's interpretation of Scripture. This argument must be a strong one, since whenever I bring it up, the 'phobes immediately change the subject.

In this regard, The Washington Post characterizes the view of anti-marriage-equality pastors thus:

But Thomas and the 77 other Baptist ministers in the association do not see same-sex marriage as a civil rights matter. Rather, they say, it is a question of Scripture, of whether a country based on Judeo-Christian principles will honor what’s written in Romans or decide to make secular decisions about what’s right.

Apart from the seriously question-begging reference to "a country based on Judeo-Christian principles," I agree completely with this framing of the issue, and under the First Amendment, the answer should be clear.

Enlightened self-interest should lead the pastors to the same conclusion. Do they seriously want the government to be the final arbiter of the correct interpretation of "what's written in Romans" or any other part of the Bible? What would they do if the government granted itself that authority and then took a position directly contradictory to theirs?
Posted by The Heterodox Homosexual at 7:21 AM No comments:

Say it isn't so, Ezra Klein.

Ezra Klein of The Washington Post, in a column on political flip-flopping, notes,

[Politicians are] trying to win elections, not points for intellectual consistency.

Flips and flops like these make the labels “left” and “right” meaningless as a descriptor of anything save partisanship over any extended period of time.

Parties — particularly when they’re in the minority — care more about power than policy.

But the voters who trust the parties don’t know that, and they tend to take on faith the idea that their representatives are fighting for some relatively consistent agenda. They’re wrong.

Gosh oh golly, who'd ha' thunk it? When I was a College Republican, I attended a CR conference at which Maryland's leading Republican politician flatly stated that Republican politicians didn't believe their own talking points about smaller government; that was just something to tell the unwashed masses. Team Blue was no better; Baltimore City Democrats and Montgomery County Democrats took just about opposite positions on economic development and job creation. Since then, politicians like Bill Clinton and George W. Bush have often come across as satires of the opposite party's dream candidate.
Posted by The Heterodox Homosexual at 7:04 AM No comments:

"Anyone who honestly recalls the 1970s, with Watergate, Vietnam, stagflation and the energy crisis, cannot really believe that our present difficulties are unrivalled." — Robert Kagan, writing in The Times of London
Posted by The Heterodox Homosexual at 6:32 AM No comments:

Kathi Wolfe of The Washington Blade has written an article arguing that the Oscars are our Super Bowl. As of this writing, every comment is from a gay man, vehemently denying it. In my circle of gay friends, at least, people discuss the real Super Bowl, but never the Oscars.
Posted by The Heterodox Homosexual at 9:04 AM No comments:

"He was no longer sure, he had in fact never been sure, whether he liked his life because he really did or whether he liked it because he was supposed to." — "Ceiling," Chimamanda Ngozi Adichie
Posted by The Heterodox Homosexual at 8:04 AM No comments:

Why companies can be bolder than politicians on same-sex marriage

While "corporation" is currently one of the obligatory snarl words, an article posted today on the Web site of Financial Times posits the following reason why the private sector can move ahead of politicans on recognition of same-sex marriage:

I think there is a deeper reason. If you work with people every day, it doesn’t seem right that some of their partners benefit from their health and pension plans while others don’t. And once you accept that same-sex partners should have workplace equality, what justification can there be for denying them the legal blessing and protection available to married heterosexuals? Even if you had religious objections, how easy would you find it to defend them while looking one of your gay colleagues in the eye?

Perhaps, but I noted some different reasons back in 2000:

First, an inherent feature of politics is winner-take-all majoritarianism. The private sector has no such limitation. Thus, while an anti-gay voter initiative cannot simultaneously succeed and fail, both ''Will and Grace'' and Dr. Laura Schlessinger can find audiences on the airwaves.

Second, while a state government can forbid gay marriage for no better reason than to satisfy irrational bigotry, the private sector cannot afford such a move. It is therefore no surprise that domestic-partner benefits are old news in the corporate world ....

Either way, we need to move beyond the simplistic, but oh so P.C., mantra that "corporate is conservative."
Posted by The Heterodox Homosexual at 6:01 PM No comments:

The joke used to be that when you won an argument against a member of the religious right, that person would respond, "I'll pray for you." Now it's the more aggressive "You're persecuting me for my faith!" I've had that one used on me a few times, and I've made it my new catchphrase in an ironic sense.
Posted by The Heterodox Homosexual at 7:19 AM No comments:

We've made a slight addition to our Two Minutes Hate.

Radfems, in their ceaseless quest for new things to hate, have discovered libertarianism. It seems that "libertarian" is their new favorite smear against transgendered people, as seen here, here, and here. The fact that those radfems get so worked up over transgendered people's desire to control their own lives, so much that they have adopted "libertarian" as a swear word, speaks volumes about those radfems' interest in anyone else's right to make choices over their own bodies.
Posted by The Heterodox Homosexual at 7:18 AM 1 comment: 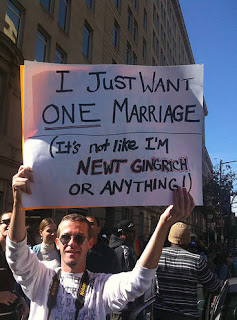 Posted by The Heterodox Homosexual at 7:17 AM No comments:

In this series of blog posts, your mission, should you choose to accept it, is to read each quote and guess, before doing a Web search, whether someone in the religious right or the politically correct left said it.

Also, “gender neutral bathrooms” force [women] to relieve themselves in space with males.

Posted by The Heterodox Homosexual at 1:35 PM No comments:

'The last time the state [of New Jersey] held a referendum on civil rights was 1915, when a majority voted “no” on granting women the right to vote.' — The New York Times
Posted by The Heterodox Homosexual at 6:55 PM No comments: