Fundamentalists of big government must engage in special pleading to appease their deity. For example, in this column, Harold Meyerson argues that

the state must ensure against periodic madness in the markets with regulations and social insurance, because madness is a potential threat in markets just as it is in other human endeavors -- because the market is a human endeavor, not reducible to a mathematical construct.

And the state is what exactly? Also, in case anyone imagines that the state, unlike every other human endeavor, is immune from madness, the history of the past century proves otherwise.
Posted by The Heterodox Homosexual at 1:53 PM No comments:

This cartoon in today's Washington Post reminds me of this blog entry from earlier this month. Where do I sign up to be one of the official Washington talking heads?
Posted by The Heterodox Homosexual at 6:49 AM 1 comment:

How to read the Bible 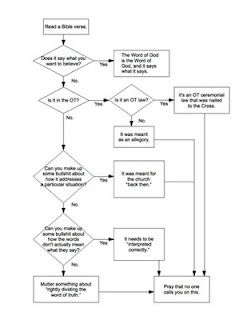 Posted by The Heterodox Homosexual at 5:51 PM 4 comments:

Have you ever thought about running a personal ad in which you describe yourself as something to the effect of "VGL GM, masc prof mil/frat-jock dude, younger-looking, work out 4-5x/wk, not impressed with others' degrees or careers, Midwestern small-town values, cowboy at heart"? So have about 95% of gay men, even those "cowboys" whose closest exposure to livestock is having fishtanks in their Logan Circle apartments, so you're definitely on the right track. Also, when you go to the bar, you'll see that we can all express our individuality in exactly the same way, so be sure to study and emulate the uniform prevailing fashion.
Posted by The Heterodox Homosexual at 3:59 PM No comments:

This morning's New York Times includes a letter to the editor pointing out what everyone outside of the mainstream media has already figured out, namely, that Michael Moore is criticizing an economic system that has benefited him handsomely. When are the talking heads going to figure out that the rest of us are tired of lectures from penthouse socialists and from whorehouse Bible-bangers?
Posted by The Heterodox Homosexual at 8:18 AM No comments:

Kinksters: The icky queers of the LGBT community

One of the ironies of progressive movements is that we are often all too eager to do unto others as our oppressors have done unto us. One particular example is the vanilla LGBT attitude toward people of various kinks. One would think that LGBT people would not be in such a hurry to pass moral judgment on unauthorized sexuality, but sadly, they often are.

I came out as into kink shortly after coming out as gay, and pretty much to the same reaction. Vanilla queers often have the same horrified fascination, or sometimes just horror, for kink that heterosexuals often have for homosexuality. Articles on kink in the LGBT media give the same conjectures for the origin of kink that people accepted in the fifties for the origin of homosexuality, and with just as much supporting evidence. Even a former acquaintance who was a card-carrying member of NAMBLA felt free to ridicule kink.

Just in case the irony is not heavy enough, I recently read a column in a leather publication mentioning "leather fundamentalists" and their opposition to anything not old-school. Some people just do not get anything.
Posted by The Heterodox Homosexual at 3:15 PM 1 comment:

What political correctness is

Political correctness is at heart the belief that certain persons' emotions are an infallible oracle into Truth with a capital T. The identity of those persons is, of course, determined through their own or certain other persons' emotions. That belief leads to the following results:

Then politically correct people wonder why they are so often compared to the religious right.

Posted by The Heterodox Homosexual at 2:52 PM No comments:

Who is the driving force behind same-sex marriage?

Researchers are finding "intersex" fish in more rivers, apparently caused by human-made pollution. Now that the environment is a traditional family value, will Republicans start to care?
Posted by The Heterodox Homosexual at 10:14 AM No comments: